GRACE is the story of a courageous woman’s lifelong struggle to overcome the demons of her childhood and adolescence in Birmingham, Alabama in the 1950s and 1960s. Libby Cobbs is driven by an overpowering need for redemption from the ugliness and hatred that surrounded her and culminated in the bombing of the Sixteenth Street Baptist Church in 1963, in which four young black girls were killed. GRACE puts this landmark event into its tragic human context. Ultimately the play is about healing, and the power of the human spirit to overcome and redeem the tragedies of the past.

GRACE is a family story. In 1963, as King’s Birmingham campaign builds to a crescendo, Libby is 16, pregnant and alone. Her beloved aunt Tee is a mother figure to her, though Tee’s husband Chambliss, a notorious Klansman, is anathema. Tee is caught in the middle between the idealistic Libby, who has sided with civil rights demonstrators, and Chambliss, whose very identity depends on his racist beliefs. Bitter and unemployed, Chambliss plans the church bombing in an effort to impress Bull Connor and win back his job with the city, but the bomb does not detonate in the middle of the night as planned. Libby is so traumatized by the realization that a member of her own family has killed the girls that she loses her unborn child. 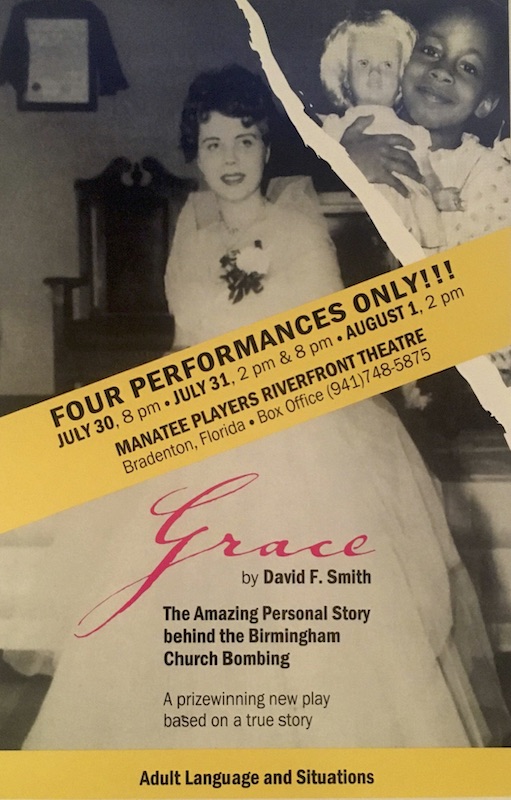 Libby’s quest for redemption leads her to become the first female minister in Alabama. In 1977, an ambitious prosecutor reopens the bombing case, discovers Libby’s 1963 statement to the FBI, and urges her to testify as a surprise witness against her uncle; the spirit of Denise McNair, the youngest of the four girls killed in the bombing, appears to Libby and convinces her. Libby’s testimony convicts Chambliss, a first in Alabama history, but she receives death threats and her family turns against her. Tee, astounded by Libby’s decision to testify and desperately afraid for her life, insists that Libby leave town immediately. In her travels Libby meets Joni, the narrator of the play, and in a surprising development they become devoted lovers.

Living with Joni in exile, Libby learns of Tee’s death and, visited by her spirit, vows to write a book laying bare the full extent of the racist conspiracy in Birmingham in the civil rights era. When Chambliss dies in prison, Libby has a nightmare in which she recalls being molested by him as a young girl. Impelled to return to Birmingham despite Joni’s warnings, Libby confronts the spirit of Chambliss at the grave he now shares with Tee. With intense moral force, Libby finally breaks free of his spell and wins the eternal love of Denise, whose liberated spirit comes to her in place of her own lost child.

GRACE blends history, psychology, spirituality and politics. The play is based on the life of Elizabeth Cobbs, who died in 1998. Her memoir, Long Time Coming, was published in 1994 and was cited as a significant factor in the decision to bring new indictments in the church bombing case in 2000. Stage and film rights have been obtained by the playwright.

back to PLAYS page

This website uses cookies to improve your experience while you navigate through the website. Out of these cookies, the cookies that are categorized as necessary are stored on your browser as they are essential for the working of basic functionalities of the website. We also use third-party cookies that help us analyze and understand how you use this website. These cookies will be stored in your browser only with your consent. You also have the option to opt-out of these cookies. But opting out of some of these cookies may have an effect on your browsing experience.
Necessary Always Enabled
Necessary cookies are absolutely essential for the website to function properly. This category only includes cookies that ensures basic functionalities and security features of the website. These cookies do not store any personal information.
Non-necessary
Any cookies that may not be particularly necessary for the website to function and is used specifically to collect user personal data via analytics, ads, other embedded contents are termed as non-necessary cookies. It is mandatory to procure user consent prior to running these cookies on your website.
SAVE & ACCEPT